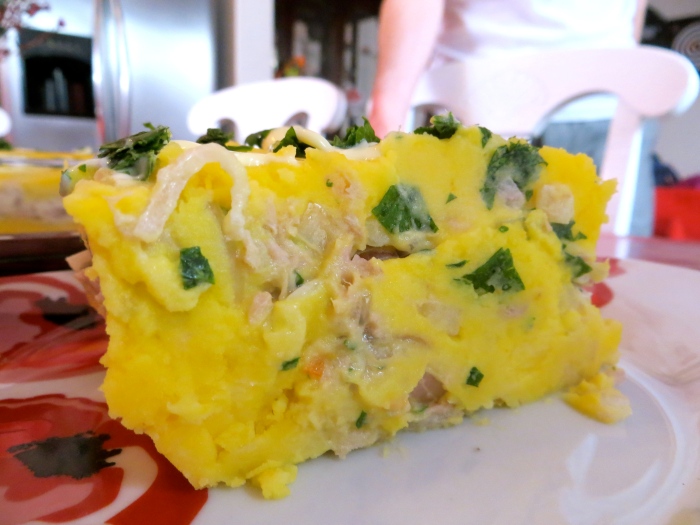 During my time here in Lima, I have been fortunate enough to take up some cooking lessons on classic Peruvian dishes.  These classes are free and take place in the comfort of my own kitchen.  Really, I’m so blessed.  Now, how did I score this opportunity?  Well, it all started with a dinner date…

My love-her-like-a-sister best friend, Bianca, is the reason why I ended up taking this trip to Lima in the first place.  When she applied for a job at a Lima-based tech company, I told her I would accompany her.  She, of course, got the job, and we found ourselves packing up and reserving two rooms in a house located about 1.3 miles away from her work.  We also made sure our boyfriends had each other as a support system while we were gone!  She arrived on a Wednesday in October, and I arrived exactly a week later.  We created a fun tradition of going to a nice restaurant every Wednesday night to celebrate our Semana-versary (week-aversary).  With the exchange rate, we are often paying less than USD30 for both of us combined (with drinks!) at these upscale restaurants.  We are sure going to miss those prices when we go back to the Bay Area…

The first time I tried the traditional Peruvian dish, causa, was during one of Bianca’s and my semanaversary dinner dates at Panchita in the Miraflores district of Lima.  This place is known for their skewered anticuchos (marinated & grilled beef heart), but we wanted to try a bunch things, so in true American fashion, we went with the sampler platter.  Best choice we could have made.  It was so good.  It also was so filling, that we even had to cancel our main order of anticuchos.  We had to save room for dessert, after all!

All of these dishes I had tried before at some point in my life, except for the yellow, square-shaped dish at 7 o’clock.  The dish was called causa, and I knew before leaving Lima, I had to know how to make it.  I was chatting with the owner of our house, mi amiga, Ivonne.  She told me that our house señora, Marisa, would be able to teach it to me!  Wow!  I hadn’t shared much conversation with Marisa since arriving at the casa.  Her Spanish is muy rapido for me to understand, and she doesn’t speak English at all.  This cooking lesson would be very interesting, I thought.  Another friend, Robert, joined our lesson as well, and since his Spanish is very good, he was a translator for Marisa and me whenever hand gestures didn’t suffice.

First, we walked to the Moderno Mercado, just two blocks away from our casa.  This was an experience in itself for me.  When I go grocery shopping, I usually take a 10 minute walk to the mall where they have a PlazaVea – a small-scale Target type of store.  I had passed the Moderno Mercado a few times but have been too intimidated by the thought of having to haggle or struggle through my broken Spanish to buy ingredients that I need.  Marisa led the way, and not surprisingly, the prices of the produce and packaged ingredients were significantly less expensive than that of PlazaVea. 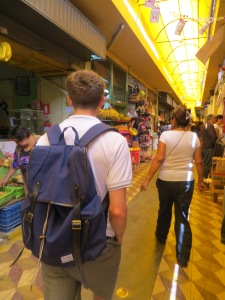 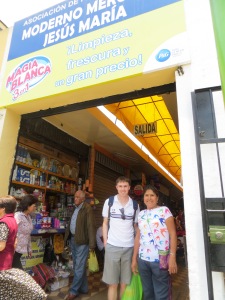 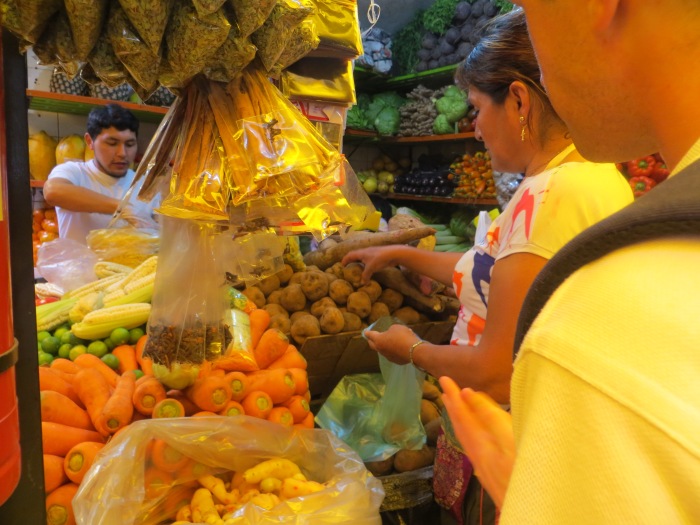 This recipe of causa requires 2 kilos of yellow potatoes

After taking so many picture of Robert and Marisa, Marisa insisted I take one of all 3 of us together. 🙂

Did you know that there are almost 4,000 varieties of potatoes found in Peru?  The Peruvian culture has certainly developed a plethora of potato recipes to reflect this fact.  This causa recipe calls for 2 kilos of yellow potatoes.  That is about 4.5 lbs.  With the Thanksgiving holiday coming up, I’m thinking causa could be a great alternative to mashed potatoes at the dinner table!

Preparing potatoes here in Peru requires some serious scrubbing! They are dripping with dirt when you buy them — even from big chain groceries. 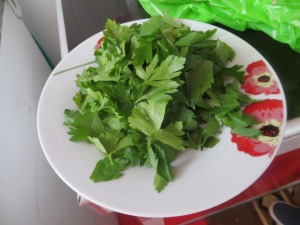 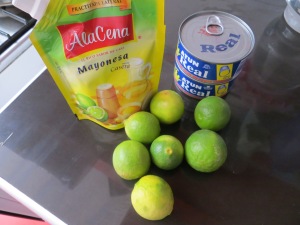 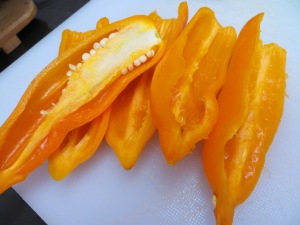 Wash the potatoes.  Leave skins on and add to a pot filled with water and 3 tbsp salt.  Be sure that the water will not overflow when boiling.  Boil potatoes until tender.  You should be able to easily pierce the potatoes with a butter knife without it breaking apart.  When potatoes are tender, set aside to cool.  When cool to the touch, peel off and discard (or snack on!) the skin.  Mash the potatoes.  Set aside.

Meanwhile, blend 3 whole aji amarillo peppers (seeds and stems removed) with the water and oil for 5 minutes until very yellow in color and creamy in texture.  Transfer sauce to a small bowl.  Add half of the lime juice and 1 tsp salt.  Mix until everything is combined. 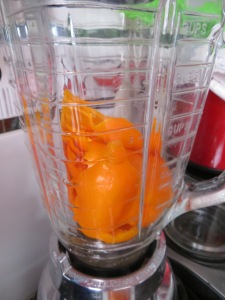 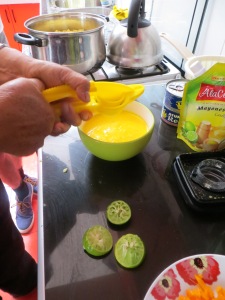 Pour aji sauce over mashed potatoes.  Mix with your hands.  Set aside. 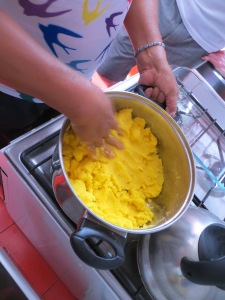 Finely dice the other two aji amarillo peppers.  Transfer to a medium sized bowl, and add the other half of the lime juice, the diced onions, and the parsley (set aside 1/8 cup for garnish).  Mix everything together.  Add mayo, 1 tsp salt, and the tuna and gently toss everything together.  The tuna is best when it is firm, so don’t overmix!  Set tuna mixture aside. 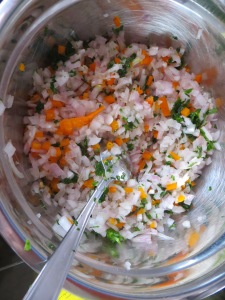 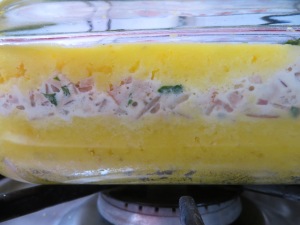 Garnish with the rest of the parsley, drizzles of more mayo, and olive halves (optional).

To serve, use a long knife to make a grid of the pieces.  Use a spatula to push up against the sides, as you pull out the servings.  Hopefully, you will have better luck pulling out your first slice than we did (see photo on the left).  Marisa had to show us the right way to do it (see photo on the right)! 😛 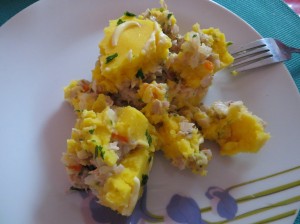 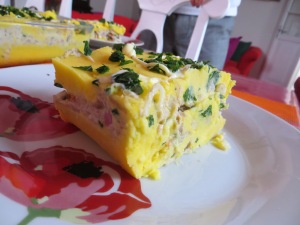 This recipe is for Causa de Atún, but before the lesson, Marisa asked Robert & I if we wanted to make causa de pollo (chicken causa) or causa de atún (tuna causa).  We opted for the tuna, and were delighted with the fresh, citrusy results.  You will not be disappointed! 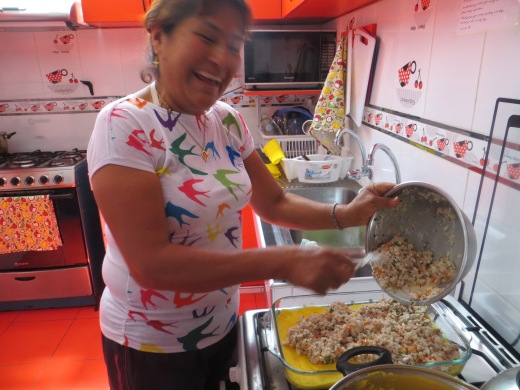