I… have an obsession with brioche…

But before I talk to you about that, I need to tell you first about this sandwich:

This sandwich changed my life.  I ate it one cold afternoon in January of this year, but to this day, I can still taste every delicious bite.  Chicken, tomato, lettuce, and cheese on a brioche roll — that. is. it.  Such simple ingredients, but you can obviously see the fluffiness of the bread, the sweetness of the dough — just look at that yellow buttery color, the perfectly seasoned pepper, the freshness of the tomatoes, the moist (but not wet) mayonnaise dressing, the perfect marriage of textures.   Each bite was cold and soft and packed with flavor.  Oh my god, it was so good.  As I bit into it, paralyzed by its flawless union of ingredients, I thought, This is not fair.  It’s not fair that I have no one to share this with.  It’s not fair that I was walking to yoga and just happened to stumble upon the patisserie where I bought this.  It’s not fair that I paid 4.80 euros for the best sandwich I’ve ever had in my life.  I declared then and there that I would one day recreate this sandwich.  For the sake of my family’s wellbeing and for the sake of America, I would bring this recipe home.  Thus, spawned my love affair with brioche.

So, you know what the first thing I did when I got back from Europe was?
Unpack?  No.
Upload pictures from my camera?  No.
Go out with my friends?  Nope.

I baked a loaf of brioche.  This was my first ever attempt at any kind of loaf of bread.  Go hard, or go home, huh?  I used a wonderful recipe courtesy of Miss Julia Child’s Baking With Julia.  It took me 24 hours to complete.  The dough has to rise four separate times before it’s even ready for the oven!  By the third rise, I wanted to give up.  I thought, I must’ve messed up something by now; it won’t even be worth it.  My jetlag was hitting me hard, too.  Sure, it was only 9:30pm EST, but according to Italian time, it was 3:30am, and I had been preparing this dough for four hours already.  My boyfriend came to my rescue.  I asked him to handle step 21 (out of 38), which was to prepare the dough for an overnight rise.  He lovingly took care of it, while I knocked out cold for the next seven hours.  I finally ended up baking the loaf the next day.  When I saw it was becoming golden brown, I took it out of the oven and transfered it to a cooling rack.  I baked it slightly too long, but let me tell you, words could not describe the pride I felt as the aroma of freshly baked brioche filled my kitchen.  My boyfriend and I took pictures of it, as if it were the Holy Grail right in front of us.  My pop was awake and getting ready for work, so I called him in to share in our “breaking of the bread.”

The outside was a little too golden, and I didn’t use enough egg wash before putting it in the oven, but for a first attempt, I couldn’t have been more elated.  The inside was buttery and fluffy.  I bit into it, and said out oud, Yup, that is brioche.  Including this first attempt, I’ve prepared brioche dough twice, yielding about six loaves.  Each loaf, however, never lasts longer than a day.  I try not to be stingy with my brioche, either; I’m always eager to have my loved ones try it.  Every time I think about venturing to other French pastries, like croissants, pains au chocolat, puff pastry, etc., all I can think about is my warm brioche.  I still haven’t even attempted to recreate the infamous Parisian chicken sandwich that started this whole obsession because every time the brioche comes out of the oven, I just want to enjoy it by itself.  It’s like it’s my baby who I’m too afraid to send to pre-school because I don’t want to let go of its purity.  The day will come though, and you will all be the first to witness.

And just to confirm your assumptions that I am, indeed, a crazy woman when it comes to brioche, here are some ‘portraits’ of my bread: 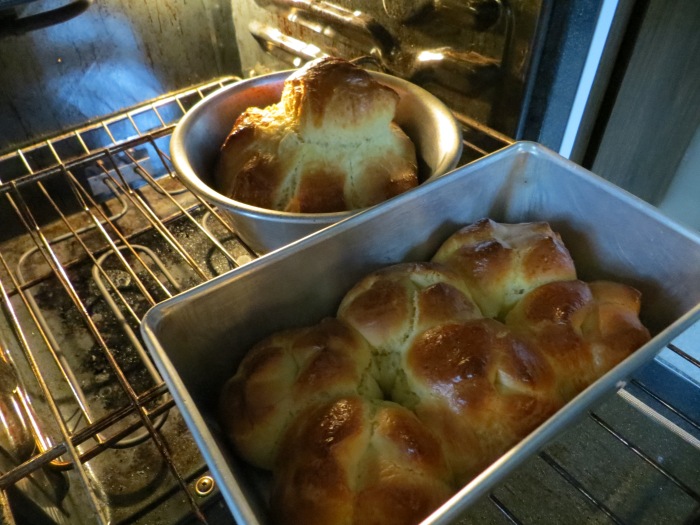 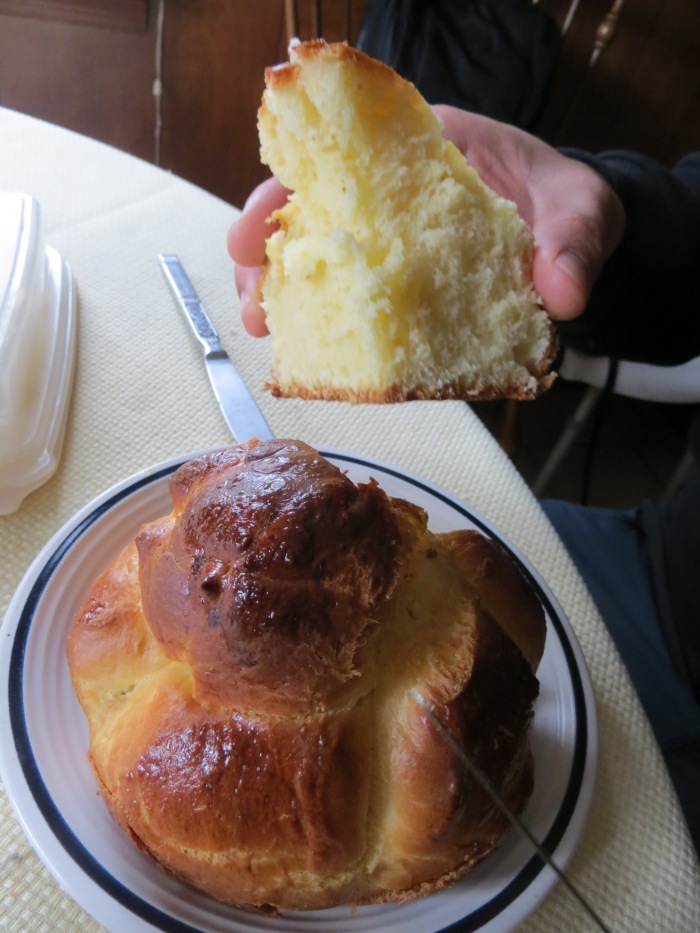 The most recent batch that I made, I actually discovered a traditional brioche pan in my cupboard!  I was so close to buying one, too!  Sure, it was a little big for the amount of dough that I had, but I couldn’t resist.  My boyfriend is convinced that my kitchen is magical, but I like to think that it’s just my mom leaving little surprises for me as inspiration…

For a little magic in your own kitchen, here’s the heavenly recipe.