When I told my tita (aunt) that my boyfriend and I were coming to visit her and her family at the their home in Amherst, Massachusetts, she hilariously asked, “You guys aren’t vegetarian, are you? 😦”  I assured her we most definitely weren’t, and in case we decided to cook for their family, I asked her if the kids were allergic to anything/didn’t eat certain foods.  All she responded was, “Veggies.”  …No problem.

I drove up to my aunt’s house a few days before my boyfriend.  When he arrived two days later, we only had twenty-four hours to get to know the ins and outs of Amherst, which most of the locals will tell you, is not difficult.  It was his first experience taking Amtrak, and throughout the ride, he kept raving to me via text about the cool passengers he made friends with, the reasonably priced beers, the pretzels, the landscapes, etc.  Although he had his fill of pretzels on the train plus a bagel that I brought him when I picked him up from the train station, he was still craving a meaty deli sandwich.  (For the record, Massachusetts bagels are incomparable to NYC bagels.) We found ourselves at Atkins Farms, a local grocery and deli that sold local produce and specialty food products.  The feeling of the place was quaint and friendly.  Shaun ordered his favorite: a rueben with pastrami.  I personally am not fond of ruebens (blame it on the sauerkraut), but this one was balanced out well by the buttery bread and Russian dressing.

After some grub, we drove 1.3 miles to Holyoke State Park.  We hiked up the Notch, as my younger cousin suggested, in order to get a nice aerial view of Amherst. 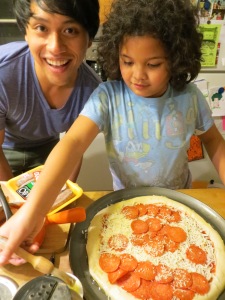 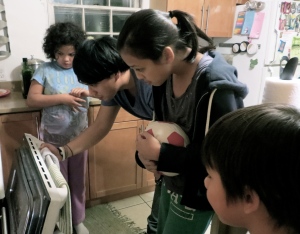 The kids checking on the pizza’s progress.

The following day, after walking the kids to the bus stop, we packed up our things and hit the road to explore some of Amherst/North Hapmton’s other gems.

We had breakfast at The Lone Wolf, as suggested by my uncle.  It was a homely breakfast joint with fun cartoony artwork and great, inexpensive breakfast options: 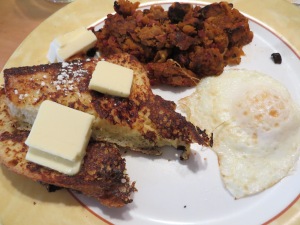 Breakfast sandwich with egg, bacon, caramelized onions, and cheddar cheese & a side of home fries ($5.75)

One of our surprise highlights from our trip were the pastries from Amherst Coffee that we picked up for the 3-hour ride back home.  According to Shaun, it was “the best ham and cheese croissant he’s ever eaten.”  My pain au chocolat was SO well done, too!  It was definitely up there with the ones I had in Paris.

In Northampton, a local told us about Mimmo’s Pizzeria.  They had GIANT slices for only $2, but unfortunately, taste was subpar.  Something about the sauce though, did make us curious.

We spent the very short amount of time that we had in Northampton at this amazing store, Faces.  It had every unique novelty gift in existence and hundres of these quoatable greeting cards/magnets:

We left Northampton at around 1pm and got back to NJ by 4pm.  Later that evening, we caught dinner and a show at a venue in Central NJ then drove to NYC from there for a late performance by one of our favorite Australian DJ duos.  If there was ever a time to use this phrase, it would be now: #YOLO. 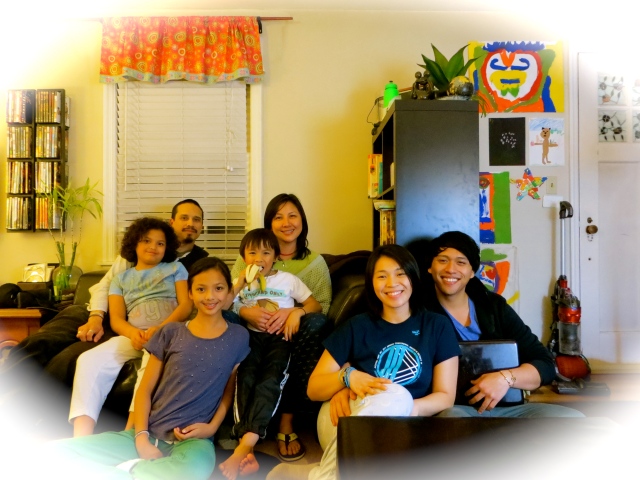 Thanks, Tita Malou & family, for the hospitality and love.  We’ll always hold a special place in our hearts for Amherst!

Heat oil in a sauce pan or wok shaped pan over medium-high heat.  In a shallow bowl, season breadcrumbs with salt to taste.  Set aside.  In a medium bowl, whisk together garlic powder and flour.  Toss chicken in flour mixture; each strip should be lightly coated.  Individually dip each chicken strip in egg, coating evenly.  Dip chicken in breadcrumbs, coating evenly.  When oil is hot enough, cook chicken for about 10 minutes until all sides are golden brown.  When cooked, transfer chicken to a plate cover with a paper towel in order to absorb excess oil.  Cool for 3 minutes.  Serve with ketchup or “fancy sauce” (ketchup + mayonnaise).