Living in Northern California means access to the infinite destinations for outdoor recreation.  My family, boyfriend, and I were fortunate enough to share an overnight car camping experience a few weeks ago at Bodega Bay in Sonoma County.  My brother, a camping veteran, advised my boyfriend and I on some supplies and clothing we might need for the trip, but for the most part, none of us knew what to expect in terms of the weather, facilities, activities, and scenery that Bodega Bay would offer.  So, we all went with our an open minds.  The hour and a half drive north-west was like a dream.  We passed through the charming town of Petaluma and also acres and acres of vineyards!  It was truly wine country.  There was one street that looked like it was straight out of the Keanu Reeves movie A Walk In the Clouds.  I just had to take a picture from the driver’s seat:

After the vineyards, we drove for about 10 miles on Valley Ford Rd., where we were surrounded by local farm and farm houses.  The sun disappeared by the time we got to our campground.  The weather was about 40 degrees cooler than in the East Bay, which was expected because of Northern California’s serious micro-climates.  My brother and my nephews pitched their tent, while my boyfriend and I transformed the back seat of my CR-V into our own personal bunker.  All the while, Auggie, my nephew, claimed the nearest tree as his “home.” 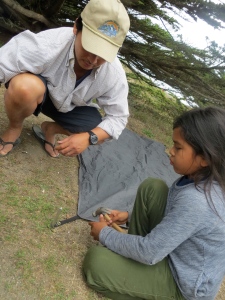 Lucky for us, the campgrounds were not crowded, and all of our neighbors were so friendly.  We even met a fisherman named Mike who gave us about 7 lbs. of freshly caught Bodega Bay salmon for FREE!  This would have cost maybe $50 at Whole Foods!  He mentioned to us that he gave some fish to a Filipino family the previous day, and they had made a sort of tamarind-based broth with it… aka sinigang!!! (This is exactly what we did, too, when we were back in the East Bay.) 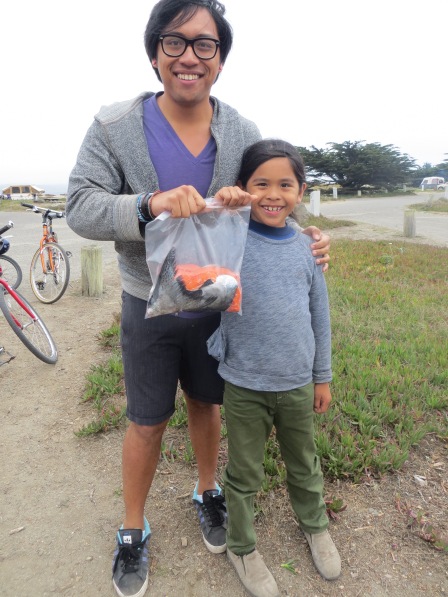 Bodega Bay was filled with biking and hiking trails and even a quiet little beach with a lighthouse at the end of it.  The lighthouse would let off a deep horn sound every five minutes, but we were used to it by the end of the trip. 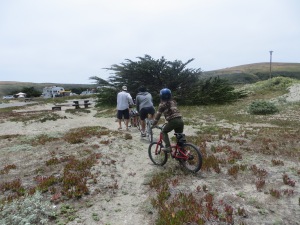 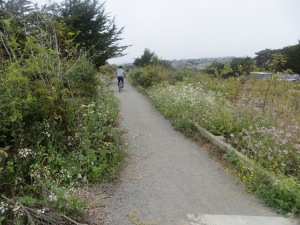 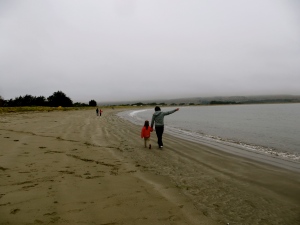 The best part of any camping trip (aside from the s’mores) is, of course, building the fire! After our bike rides, the temperature began to drop, and we were looking forward to a nice meal around the campfire.  My brother marinated a juicy flank steak prior to the trip, so by the time the fire was hot enough, it cooked right up: 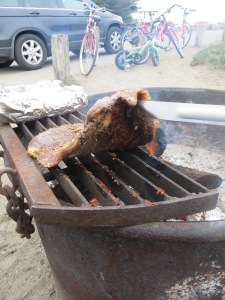 One thing I learned during this trip is that potatoes are the perfect campfire ingredient!  My brother cut some open and wrapped them in aluminum foil (a very necessary supply for car camping), and he dropped them right into the fire.  They cooked until we were almost finished with our meals, so be sure to put them in early! (Don’t worry; they won’t burn.)  I cubed some russet potatoes, drizzled a good amount of extra virgin olive oil on them and seasoned them with salt and pepper.  They went right into the skillet and onto the fire pit stove.  The nice thing about car camping is the luxury you have to BYOS (bring your own skillet).

We enjoyed this hearty meal with corn on the cob and brown rice that my brother cooked over the stove, as well.  It was the best camping meal I have ever had!  For dessert, we had freshly brewed coffee, oatmeal raisin cookies that I had made the day before, and the grand finale… S’MORES: 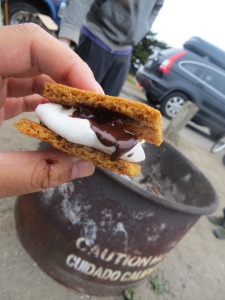 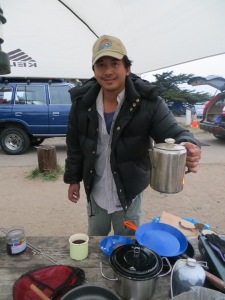 If it’s available to you, I HIGHLY recommend going as organic as you can with the s’mores ingredients!  It will beat the Hershey, Honey-Maid, Kraft Jet-Puffed combo ANY DAY! (Seriously)

After our mini-getaway, we already wanted to go back, but we know that there is EVEN MORE places to discover here in NorCal.  Bodega Bay was just the beginning… 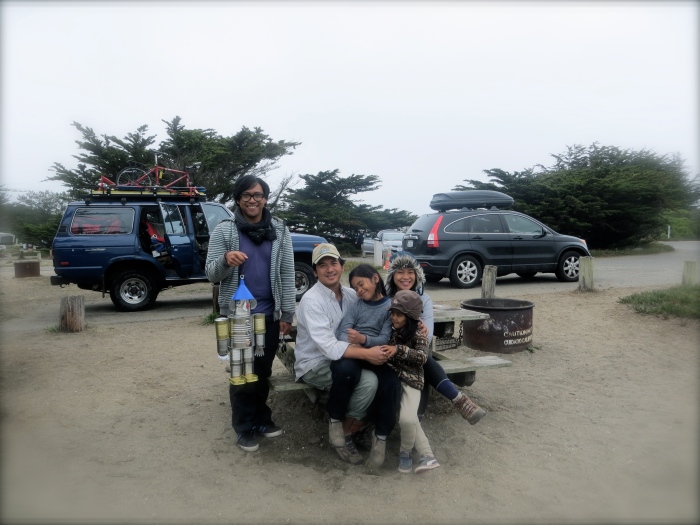