Last Wednesday, my Pop and our family friend, Tyrone, arrived in the Bay Area after spending seven days driving cross country. They drove my car filled with the remainder of my stuff all the way from New Jersey. It was out of the goodness of their hearts to take some time off from work to do me the favor, but I’m glad they were able to cross ‘cross country road trip’ off of their bucket lists, too. They flew back home early on Sunday morning — Father’s Day. While they were here, we took pictures by the Golden Gate Bridge, toured the beaches and overlooks of Marin County, danced at the North Beach Annual Street Festival in San Fran, and enjoyed home-cooked meals together at my brother’s house. My pop’s specialty is grilled steak, and he was more than happy to throw some juicy Costco-sized ribeye steaks on the barbe for us. It ended up being a feast in honor of: Pop and Tyrone’s visit / Father’s Day weekend / my brother’s early birthday / the nice weather / ….. aww hell, do we even need a reason? It was so delicious. I’m hoping my pop retires already and joins us in the East Bay sooner than later. 🙂

Arriving in California after driving through 10 states along Route 80! 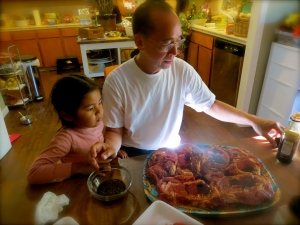 Lolo (grandpa in tagalog) and his little helper marinate the steak 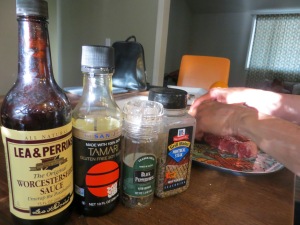 Grill steaks on barbecue or cast iron grill pan (greased with melted butter) over high heat. Save excess marinade and brush on when steak has some color. Continue to grill until desired consistency (We like medium rare!), flipping over once. 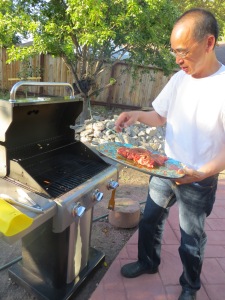 Pop is very humble about his steak, claiming that ‘it’s the meat’ that makes it good, but truth is, it truly surpasses any steak that you’ll find in a fancy, expensive steakhouse. Eat your heart out, Peter Lugar! Luckily for us, Pop will make his steak, inspired by my mom’s techniques, whenever we ask.

Our steak feast was accompanied by a vegetable medley on skewers, a vinaigrette-based salad, and Filipino Food for the Gods.

My sister-in-law was in charge of the salad and I on dessert. As you can see, I was reunited with all of my kitchenware and of course, my aprons from New Jersey. 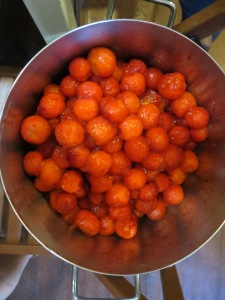 The kitchen was filled with a sweet, cinnamon aroma from the plum jam cooking. My brother’s mother-in-law peeled hundreds of plums picked right from my brother’s plum tree in his backyard!